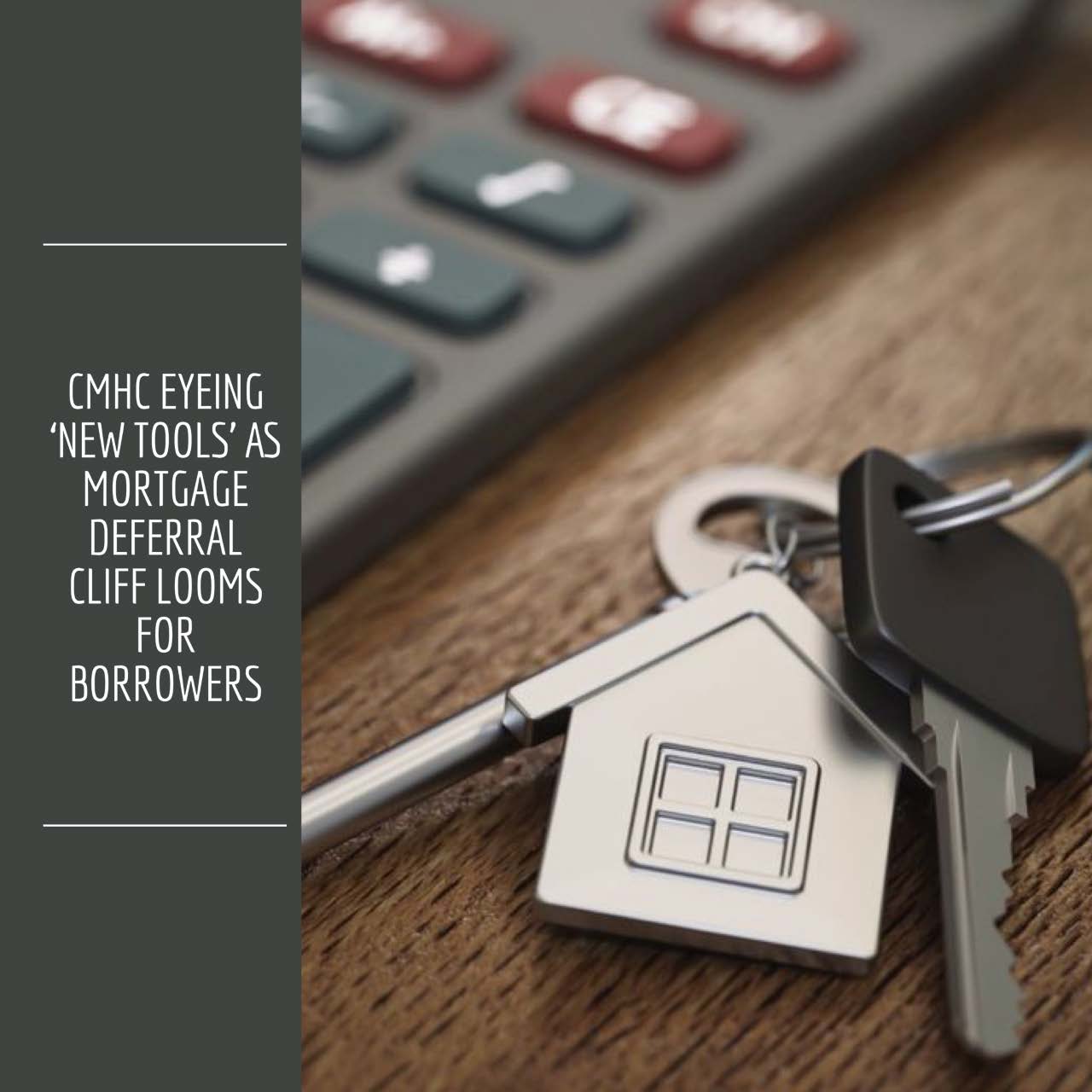 This fall, loan payments unemployed borrowers kicked down the road must start being repaid again, plus interest

With a six-month window for some borrowers to defer their loan payments closing fast, Canada Mortgage and Housing Corp. says “new tools” may be needed to help homeowners get through the coronavirus crisis.

CMHC says it has already provided lenders with tools to help struggling households, including deferred mortgage payments for up to six months, extended repayment periods and the ability to add missed payments to a mortgage balance and spread them out over the repayment period.

But homeowners who decided to postpone repayment back in March may be done or nearly done their payment holiday, which the CMHC suggests may require further action on its part.

“As the end of the initial six-month deferral period from the beginning of the pandemic approaches, we recognize the need to continue to monitor this diligently and potentially develop new tools with our partners to help Canadians during this unprecedented pandemic,” the mortgage-insuring Crown corporation said in an emailed statement. “This work is ongoing and we will provide Canadians with updates as they become available.”

The CMHC’s comments come ahead of a debt-deferral “cliff” the agency has warned Canada is facing this fall, when loan payments unemployed borrowers may have kicked down the road must start being repaid again, plus interest. CMHC President and CEO Evan Siddall even cautioned that up to one-fifth of all mortgages could fall into arrears if the economy doesn’t rebound.

That cliff, and the need in some cases to extend deferral periods, remain the biggest concerns among credit unions, said Michael Hatch, vice president of government relations for the Canadian Credit Union Association.

“CMHC is obviously aware of that,” Hatch said in an interview. “They’re looking at what the options might be from that angle and we hope that they’re able to put something together soon because that timeline is approaching.”

The CCUA said in June it had participated in a consultation with CMHC about what to do about COVID-19-related mortgage deferrals. The industry group also said it had surveyed credit unions to get their views on the existing toolkit CMHC has to manage mortgage defaults, including mortgage-payment deferrals with no offsetting prepayments.

A summary of the survey of the 66 credit unions said some of the financial institutions did not view the six-month deferral period for mortgage payments as “sufficient,” and wanted it extended further. Fifteen credit unions that responded, or approximately 22.7 per cent of those surveyed, had concerns about the deferrals.

“If credit union members are unemployed for longer than 6 months, mortgages will begin to become delinquent,” the report adds.

The survey report also noted that the CMHC — which insures mortgages in case borrowers default on the loans — is “considering expanding” four tools to prevent COVID-19-related mortgage defaults, and asks if that’s the right move.

A CMHC spokesperson said in an email that it was “premature” for the agency to discuss specific outcomes of their ongoing conversations with lenders and other mortgage insurers.

But according to the CCUA’s findings, a large majority of credit unions were in favour of expanding the CMHC default-management tools. No option received less than 78.79 per cent support for its expansion.

“The comments opposing the expanded tools viewed them as increasing systemic risk, and not being necessary since existing tools are sufficient,” the report said.

Australia and the United Kingdom have recently taken steps to permit longer deferral periods for mortgage payments, meaning it would not be a “stretch” if something similar were to happen here, said Paul Taylor, the president and CEO of Mortgage Professionals Canada.

That said, if Canada were to follow suit, borrowers may need to provide more details to prove they do indeed need to keep deferring.

“The banks were so inundated with requests when the initial announcements were made that they had no operational options but to grant it to everyone,” Taylor said in an email. “I expect the qualification criteria will be much more stringent (read: there will actually be one) for requests come October.”

Banks and credit unions have already allowed hundreds of thousands of payment deferrals. However, there is an expectation among some lenders that policymakers will continue supporting them if they need to keep supporting borrowers who have lost income during the pandemic, said Rob McLister, the founder of mortgage-comparison website RateSpy.com.

“Whether that means direct government backstopping of distressed mortgages, leniency with capital requirements, flexibility with how lenders must account for missed payments, or something else, it’s too early to tell,” McLister added in an email. “The result will likely be the same: Consumers who’ve lost income due to the pandemic will be offered continued flexibilities by most lenders through year-end, at least.”

The Office of the Superintendent of Financial Institutions, a federal banking regulator, has said that payment deferrals granted during the initial six-month period should not lead to that loan being deemed as non-performing, or not being paid back. As a result, banks don’t have to hold more capital just because a loan’s payments have been deferred.

OSFI has said this capital treatment will only apply for payment deferrals up to six months, but that it will “revisit this treatment in the future as needed.”